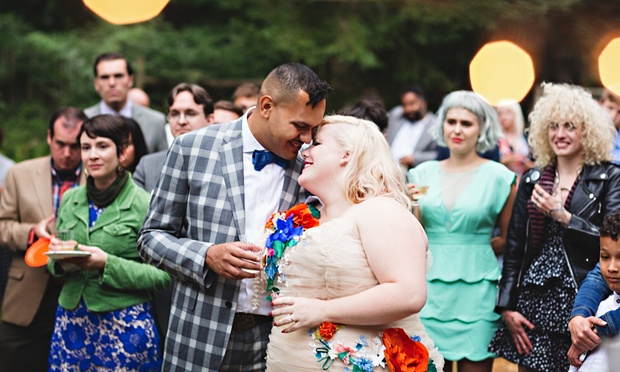 As a fat woman, you are told to disguise, shrink or flatter your body. But I wasn’t going to hide at my wedding – the older I get, the harder it is to depoliticize simple acts

Aham and I got engaged on my birthday. He took me to dinner, suggested a “quick nightcap” at our neighborhood bar, and then, surprise! Everyone was there – our friends, our families, the kids, four random people who were just trying to get a damn drink on a Sunday night without being accidental set dressing in somebody else’s raucous public proposal (sorry, dudes). I was so happy. He took my hand and led me to the back; there was a paper banner that said my name (the bartender made it – we go there a lot); there was a live string duet. I was confused. Why was there a sombre cello at my birthday party? Why was my boyfriend doing his Intense Face? Wait, it’s almost 10pm on a school night and we’re at a bar – why ARE the kids here? Then it all happened at once: the knee, the ring, the speech, the question, the tears. All the hits. It was a full-blown grand gesture.

Months later, I asked him why he did it that way – such a big spectacle, such an event, not precisely our style – and I expected something cliched but sweet, like, “I wanted to make sure our community was a part of our marriage,” or, “I wanted everyone to know how much I love you.” Instead, his response cracked me up: “One time when you were drunk you told me, ‘If you ever propose to me, don’t do it in the bullshit way that dudes usually treat fat girls. Like it’s a secret, or you’re just trying to keep me from leaving you. Thin girls get public proposals, like those dudes are winning a fucking prize. Fat chicks deserve that, too.’” I probably would have finessed it a bit if I’d been sober, but way to lean in, bossy, drunk past-Lindy!

It’s not that I’d ever particularly yearned for a grand gesture – the relationship I cherish lives in our tiny private moments (and, as I’d later discover at my bridal shower, I’m surprisingly uncomfortable being the object of public sincerity) – but the older I get and the longer I live in a fat body, the harder it is to depoliticise even simple acts. A public proposal to a publicly valued body might be personally significant, but culturally it shifts nothing. A public proposal to a publicly reviled body is a political statement.

I’ve dated men who relished me in private but refused to be seen with me on the street, or who told me, explicitly, that we had no serious future because they were afraid their friends would laugh at them. I’ve been eagerly approached by men who clearly saw me as nothing but an arousingly taboo body type, which I find equally demoralizing (other fat people don’t mind, I know – that’s cool, too). I just wanted to be a person, and, if I was lucky, to fall in love with a person – neither in spite of my body nor because of it. Once I finally did, I wanted to crystallize that, make it solid, and broadcast it where younger versions of myself could find it.

“I grew up assuming that I would never get married,” I wrote back in November, in a piece called Why I can’t wait to be a fat bride, “because marriage was for thin women, the kind of women who deserved to be collected. How could I be a bride when I was already what men most feared their wives would become? I was the mise en place for a midlife crisis. I was the Ghost of Adultery Future. At least, that’s what I’d been taught. And that’s why I can’t goddamn wait to be a fat bride.”

And: “When I think back on my teenage self, what I really needed to hear wasn’t that someone might love me one day if I lost enough weight to qualify as human – it was that I was worthy of love now, just as I was. So I’ll be fat on my wedding day. Because being fat and happy and in love in public is still a radical act.”

We got married a week ago at my favorite place – a log cabin that my parents bought when I was a few years old and have painstakingly fixed up over the intervening 30 years.

My dad didn’t make it to my wedding, but even though I believed that death is a hard return, I can always feel him at the cabin. I walked down the aisle to a recording of him playing Someone to Watch Over Me on the piano; my fiance wore a blue plaid suit; a bald eagle flapped over the ceremony; the food was transcendent; my sister’s fondant camellias slid off the cake; someone spilled red wine on one of the beds; I got my period; it poured after a month of uninterrupted sunshine, then abruptly stopped just as we emerged from the tent to dance; a friend of mine got confused about the route to the bathroom and walked into my mom’s bedroom naked. Oh, and Aham’s 100-year-old great-grandmother had a tiny stroke on the way to the wedding, went to the hospital, got better, AND STILL CAME AND PARTIED. It was a gorgeous, chaotic, loving, perfect day.

nd I was fat as hell the whole time.

“The first thing that a plus-size wedding dress must be in the eyes of the wedding-dress industry is ‘flattering’,” says my friend and wedding planner Alithea O’Dell. “Their primary concern is to hide your body, which is just absurd when you think about how much inspiration and thought and talent goes into designing straight-sized dresses. Those dresses can be many things – a show stopper, glamorous, beautiful, delicate, sexy – before they are ‘flattering’.”

Well, I don’t hide any more in my everyday life, and I definitely wasn’t going to hide at my wedding.

I skipped the bridal boutiques altogether. My friend, artist and designer Mark Mitchell, and I conceived of the most beautiful dress we could imagine, which, according to the old orthodoxies, just happened to be the least “flattering” dress possible for a fat chick: a strapless, skin-tight mermaid gown exploding with silk flowers. The flowers – my god, the wisteria! – added extra bulk in areas I’m supposed to try and “slim”. The silhouette accentuated my stomach instead of camouflaging it. My arms looked like what they are – strong, and big. I didn’t wear Spanx. I was beautiful. 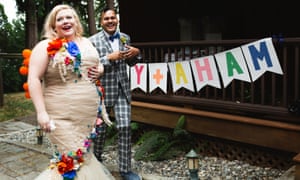 I was beautiful … my friend and I conceived of the most beautiful dress we could imagine Photograph: Jenny Jimenez/www.photojj.com

But “beauty” is a fraught concept. There’s an awkward three-way tension between wedding culture and feminism and fat acceptance – because of what “acceptance” demands of women in our culture, a lot of fat activism takes the form of fat women tr
ying to “prove” that they can wear the trappings of male fantasy and traditional gender roles just as well as thin women. Fat women can be pretty. Fat women can get married. Fat women can “get” conventionally attractive husbands. But how is that constructive? Male approval isn’t where my self-worth comes from – and that realization was a huge part of what made my current relationship healthy and fulfilling. Respectability politics might boost mainstream attitudes toward fat people in the short-term, but what does it do for women in general in the long-term? How can I simultaneously fight for women to be free of patriarchal standards and for fat women to be allowed to participate in those standards?

My short answer is that I am far more interested in expanding the realm of self-expression for fat people than in adding to the already extensive list of what we “can” and “can’t” wear. But I also asked Alithea how she reconciles that tension as a wedding planner, a feminist, and a fat woman. “I agree,” she said, “that sometimes women will still internalize these patriarchal ideas we are taught about how we MUST get married, we MUST be as beautiful as possible, we MUST be loved by a cis man, and if we don’t, we aren’t truly happy or successful. Obviously, this is bullshit. Of course a partner brings us happiness in so many ways that others can’t, but there is a fundamental structure of love, and happiness, and true peace most of us must find in ourselves before we find happiness with a partner, otherwise it’s like a beautiful house built on a shitty foundation. The strongest conflict I navigate is the one between feminism and the capitalism that is so deeply interwoven into weddings. Capitalism is not feminist – it is built on preying on cheap labor, by literally enslaving people to manufacture things so other people get rich. The wedding industrial complex has convinced us that the only ‘good’ weddings are the weddings that cost the most. But I see weddings as a tradition, a ceremony, and those things are important in all cultures. So I work with my clients to strip away the gross stuff that doesn’t feel right, the stuff they’re told they ‘need’, and rebuild a wedding into a ceremony and a party that is reflective of their values, something that they are proud of and feels like an honest celebration of their love.”

Choose your rituals, but make them yours. If you want to look like a flower market ate fat Betty Draper and then barfed her up in the middle of a haunted forest (YEEEESSS!), great choice. If you want to get married to a burrito while wearing a barrel with suspenders, I’m cool with it. If you think the very concept of marriage is hot garbage, that’s legit. But regardless, remember that you absolutely do not have to “fix” your body, chase after “flattering”, be somebody’s dark secret, or beg for permission to be happy.

And to my 16-year-old self, if you’re reading this, listen to Alithea; she is wise: “When I enter into a relationship, I am not filling a hole that society has dug out of my soul, telling me that I am fat, and because I am fat I am ugly, and because I am ugly I am unlovable. I am there, in their bed and in their life, for the purest of reasons, not because I am insecure and need the external validation that a patriarchal society has taught us to seek. I am not seeking validation from a partner, I am seeking partnership in that partner.”

I have never in my life been fatter than I was on my wedding day, I have never shown my body in such an uncompromising way, and I have never felt more at home in that body. I was fully myself, and I was happy. We are happy. This life is yours, fat girls. Eat it up.